This is only my second blog post – to understand what this blog is about, read the first here.

Before I get stuck in to the meat next week, I just wanted to give a taster of what a bit of scientific analysis of data can tell us about our economy.

Right now the world is still suffering the effects of a massive financial crash in 2008.  It would therefore be a bit disturbing to find out that the financial markets are primed for another crash.  But I’m afraid that’s what the data suggests.  We’re just waiting for the next shock to send markets into panic – good job global politics are so stable right now!

By the end of the post you’ll be able to see the crash coming too, and even explain it to someone else.  How we got into such a mess is what the rest of the blog will be about.

So anyway, what am I basing this claim on:  the brilliant maverick economist Steve Keen wrote a paper in 2013 called “A Bubble So Big We Can’t Even See It”.  (Think of Keen as kind of like economics’ answer to Johnny Rotten.)  Here’s a graph from that paper, as a picture paints a thousand words: 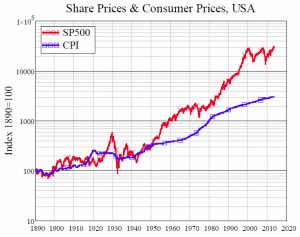 You can see the bubble clearly – where the red line starts moving away from the blue line on the right hand side.  The two V-shapes on the very edge are the dot.com crash of 2000 and the 2008 financial meltdown.  But you can see from this graph these crashes didn’t burst the bubble at all, they just deflated it a bit and then Governments used all their puff to blow it back up.  But what’s actually going on here?  What are you looking at?  What does this all mean?   Well…

The blue line is the Consumer Price Index (CPI) for America from 1890 to 2013.  CPI is one way to measure inflation.  You’ll be used to seeing inflation rates quoted on the news as, say, 2% or 3%, and you know that this is the rate of price rises.  But when you think about it, prices of different goods move up or down at different rates, so how do they come up with a single rate?  The CPI is based on a large selection of different goods.  Imagine it like a shopping trolley – they measure the change in price of the whole trolley.

So that’s CPI.  Imagine the price of that “trolley” was 100 in 1890.  The graph shows the increase in prices relative to that starting point of 100.

The red line is an index of share prices.  It happens to be the Standard and Poor’s 500 index, and if you want to know exactly what that is you can look it up.  But for now, all you need to know is that it shows the increase of a representative selection of share prices, just like CPI shows the increase in price of a representative selection of consumer goods.  Again, the 1890 value is set at 100, so that we can see the relative increase in share prices compared to consumer good prices.

And what we see is that until 1950 the two prices move very closely together, with the exception of a big spike in share prices before the 1929 crash.  Share prices then increase a bit faster than consumer prices through the ‘50s and ‘60s, levelling out in the ‘70s but with a couple of dips in share price (it was a turbulent decade).  In the ‘80s share prices start to pull away from CPI again (though you can just about see the ‘87 crash if you look closely) and then the stock market shoots up from the mid ’90s.  You can clearly see the dot.com crash in 2000 and the most recent crash in 2008.  But the scary thing about this is that if we think of the historic pattern of the stock market inflation being close to CPI, these crashes didn’t even come close to bringing prices back to normality.

And this is the point – we’ve been thinking of the economy returning to “normal”, but in fact it’s returning to its over-inflated bubble state – as the title of Keen’s paper states, it’s a bubble so big we can’t even see it.

Except you can see it clearly in the graph: the bubble starts in the early ‘80s and keeps inflating.  Just imagine a pair of lips pressed up against the point in 1980 when the red line shoots off from the blue.  The dot.com crash is like a sudden leak in a balloon, that was quickly repaired and then re-inflated.  Then the balloon sprang another leak in 2008, and we patched it again and started blowing.  Only by now, the balloon is getting pretty worn out.  We’re having to blow really hard just to keep it in this state, and we’re running out of puff.  The next burst could be the one that causes the economy to squee all round the room, spraying everyone with saliva.

Hopefully that explanation is clear.  There are two obvious questions at this point:

And now here’s the problem.  I’ve spent years researching this stuff because I find it interesting.  I can explain and justify all my views on this, with loads of detailed references to the technical details of how the economy functions.  It doesn’t mean I’m right, but at least my opinion is informed.

But that’s a bit useless really – what do I do with all this information?  Well obviously I’m writing a blog, but that’s a bit useless as probably only a dozen people will read it.  I’m not trying to change the world or start a campaign, but having studied this stuff I might as well write about it (I like writing).  If you stick with me over the weeks you can form your own opinion on whether my interpretation is correct.  And if it is, don’t you think that maybe someone should have told you about this?

What’s even more terrifying than seeing so clearly the bubble we’re in, is the fact no Finance Minister, no central banker, no orthodox economist understands this.  Steve Keen does, as do a number of other free-thinking economists (Richard Werner and Wynne Godley particularly stand out – but there are many others).  Reading their work is of much more value than reading mine, but generally they’re writing for other economists, and their work, brilliant as it is, is technically difficult, and isn’t getting the attention it deserves.

Which is a shame, because the economy affects all of us, and actually it belongs to all of us.  When the next crash happens, it’s your job that’s going to be lost.  Or your best friend’s.  Or your children’s.

It may seem impenetrable, but most people would be able to understand what is going on with the economy if it was explained in the right way.  That’s the goal of this blog.   I probably can’t pull this off, but I’m going to have fun trying.

4 Replies to “Maybe Someone Should Have Told You…”

← Can We Provide Enough For Everyone? ← Where Do We Start?