What on earth are institutional cash pools?  Have I finally lost the plot completely?

Trust me, this is really exciting stuff.  An institutional cash pool is a large holding of “cash” by a group of institutions (hence “pool” – they pool their holdings together).  We’ll get into the detailed explanations next week, but for now you need to know that by “large” I mean at least $1 billion.  Many of these pools are much, much bigger – $1bn is large by the standards of most of the economy, but would be a small institutional cash pool – and it’s this size that makes them so significant.

So let’s get straight into their incredible scale – here’s the latest chart I have, from a 2015 paper by Giovanni de Iasio and Zoltan Pozsar: 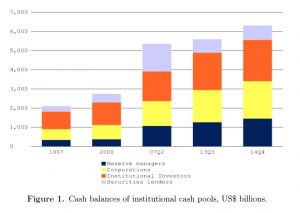 You’ll see that in 1997 such pools totalled just over $2 trillion – at that time nearly half a trillion more than UK GDP, so already this was a globally significant concentration of wealth.  By 2007, just before the crash, they’d increased by 250% to over $5tn.  And perhaps most shocking is that even after the crash they just kept growing, albeit at a slower rate, clearing $6tn by 2014.  That’s a 3-fold increase in 17 years.  To get an idea of how huge that is, imagine if the UK economy had tripled in size in that time!

Such an intense and rapid accumulation of wealth cannot fail to have an impact.  I’ve used the word before, but it is the only one that will do – this is a seismic shift in the global economy.

Now seeing shifts in wealth ownership on such scale and of such significance, you’d think economists would be right on top of studying this, right?

Nope.  The first study on institutional cash pools (also by Zoltan Pozsar) was published by the International Monetary fund in 2011 (note that this is the IMF, so this is mainstream stuff, not some crackpot website).  Pozsar actually states that to the best of his knowledge this was the first paper to study the phenomenon of institutional cash pools.  Since then he’s written a series of fascinating papers as he’s explored the subject further, and reading them chronologically you see the unfolding understanding of this area as he’s continued his research.  But searching on-line I can’t find anyone else who has tackled this subject directly who isn’t themselves working with Pozsar.

Having said that, I’ve just found a new paper by Pozsar and de lasio that was only published 2 months ago, and has several very interesting references that I need to follow up.  This perhaps shows you how fresh study in this area is, and how little understood.

This might lead you to conclude that this is therefore not important, and just a fringe matter.  I’ve got three things to say to that:

Pozsar has worked for some of the most important financial institutions in the world.  He joined the New York Federal Reserve during the crash in 2008, where he researched shadow banking.  No regulators or academics (bar a few geniuses like Perry Mehrling) had been paying serious attention to the workings of this system, so after the crash institutions were scrabbling around trying to understand it.  Pozsar did some brilliant work mapping it, including this NY Fed Staff Report in 2010, and has continued since then to look in more detail at its elements.

From the NY Fed he moved to the IMF, where he authored a number of important papers on shadow banking, including the 2011 paper cited earlier.  He then moved to the US Department of the Treasury as a senior advisor (you can’t get more mainstream and credible) where he produced another paper in 2014 giving even more detail on the impact of cash pools on the financial system as a whole.  He moved to Credit Suisse in their Global Economics and Strategy research group in 2015 and in the same year authored a new paper with his latest findings.  Most recently, he co-authored with De Iasio this paper published in December 2017 by the European Systemic Risk Board (established by the EU in the wake of the financial crisis).  This paper is less interesting than the others, but shows that this work is progressing as we speak and being picked up by the most important global economic institutions.

He’s not some fringe nutter.  And his writing is incredible.  Like a true scientist, he is studying what is actually happening in the real world and writing up these observations.  He draws out very clearly the conclusions that these observations point to, and even though they are radical, he writes in a cool, sober manner without any tub-thumping.  And he’s writing about an extremely specialist and complex area, in which he has worked all his life, for a professional audience, yet he writes in a way that a lay-person like myself can follow (just about, with a bit of effort and background reading).  He’s everything I aspire to be in an economist.

But enough of the fan worship.  The point is, this is a real issue of great significance that economists have utterly missed.

Last week I showed the marked drop in the proportion of income going to wages.  Where’s all that wealth going?  Well a lot of it is ending up here, with dramatic impacts on financial markets and then on the real economy.  Here is a graph from the earliest paper, in 2011.  It’s a line graph, so you can see the incredible growth over time.  The blue line is the available data Pozsar had gathered at that time, the dotted red line his estimate of the true volume.  But you can see comparing the figures to the chart above that even this was an underestimate.  Most notably, this graph excludes foreign exchange reserves of central banks, so what you are seeing here is the rise of privately-owned cash pools – a large component of this is business saving, discussed 4 weeks ago.

You can literally see the mountain of wealth being accumulated, the other side of the coin to the decline in wealth going to workers that we saw last week.

As mentioned, such a tidal wave of wealth flowing in one direction cannot fail to have a dramatic impact on the economy, and in the coming weeks we will unpack what institutional cash pools are, how they operate, what their impact has been, and what this tells us about how we build an economy that provides enough for everyone.